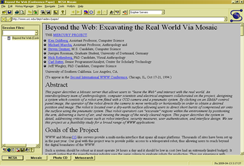 HTML5 is the newest version of Hyper Text Markup Language. The first web browser was introduced in 1993 and the name was MOSAIC. The development of MOSAIC was at the NCSA (National Center for Supercomputing Applications). Later it was discontinued to development on 7th of January 1997. Still the people were using the nonstandard version of HTML.

The First Draft of HTML5 Was announced in January 2008. And amazingly HTML5 has a broad browser support. Though the HTML5 is still under developing phase. And a lot of organizations are working and planning for the development of HTML5.

We can’t expect the HTML5 may be the future of Web Designing, but we can say that this is the present of Web designing. Before the development of HTML5, we were in compulsion to work in Photoshop and Flash application, but with the development of HTML5, these affords has been reduced. Many more long script code can be done with a simple tagging. As we can use <details> and <summary> tag for show and hide function of Java Script. We need not to put a long affords to code this thing. Apart from this feature we can use the 3D image with <canvas>, the special designed paragraph with <article> and many more.